Cannabis Distillate: What It Is and How to Make It

Cannabis distillates are a new type of cannabis concentrate making waves in the marijuana industry. These distillates can either be in the form of THC distillate or CBD distillate and are created through a process known as distillation. Though they are quickly becoming very popular, consumers should be careful when using them because they are refined and almost 100% pure.

What is Cannabis Distillate and How to Make It

What is Cannabis Distillate?

Cannabis distillate is a type of marijuana extract which, as the name suggests, has undergone distillation. One method for doing this is Short Path Distillation. This method strips cannabis of everything except for the core compound, known as the cannabis distillate. Distillates do not have any flavor, taste, or aroma.

Here is where things get tricky. All cannabis distillates are oils; however, not all cannabis oils are distillates. Cannabis oil is only a distillate if it has been stripped of all other materials except for one.

Although distillates lack terpenes and other naturally occurring flavors and aromas, they are still very potent.

How to Make Cannabis Distillate

Before you can make a cannabis distillate, marijuana extracts have to undergo winterization and decarboxylation. Then, you can finally begin distillation.

The cannabis distillate process starts with extraction. This is where you separate cannabinoids from the marijuana plant.

Extraction is when you use solvents, such as ethanol, carbon dioxide, or a hydrocarbon, to extract raw marijuana oil, also referred to as crude oil. The level of THC/CBD in crude oil ranges between 60% to 80%. You can also extract marijuana physically through sieving or using a rosin press. Compared to solvent extraction, the physical method produces more impure cannabis extracts.

The cannabis extract is passed through a purification process through which the unwanted byproducts such as plant waxes, lipids, fats, chlorophyll, and contaminants are removed. This takes place in a freezing environment.

The raw marijuana oil is mixed with ethanol. The mixed solution is then placed in a freezing environment for up to 48 hours. During this time, the impurities coagulate and separate, remaining at the bottom of the mixture. The mixture is then filtered, with the impurities left behind, giving you a purer concentration of the extract. A rotary evaporator or a falling film evaporator is used to remove ethanol from the mixture, leaving you with a solvent-free extract. 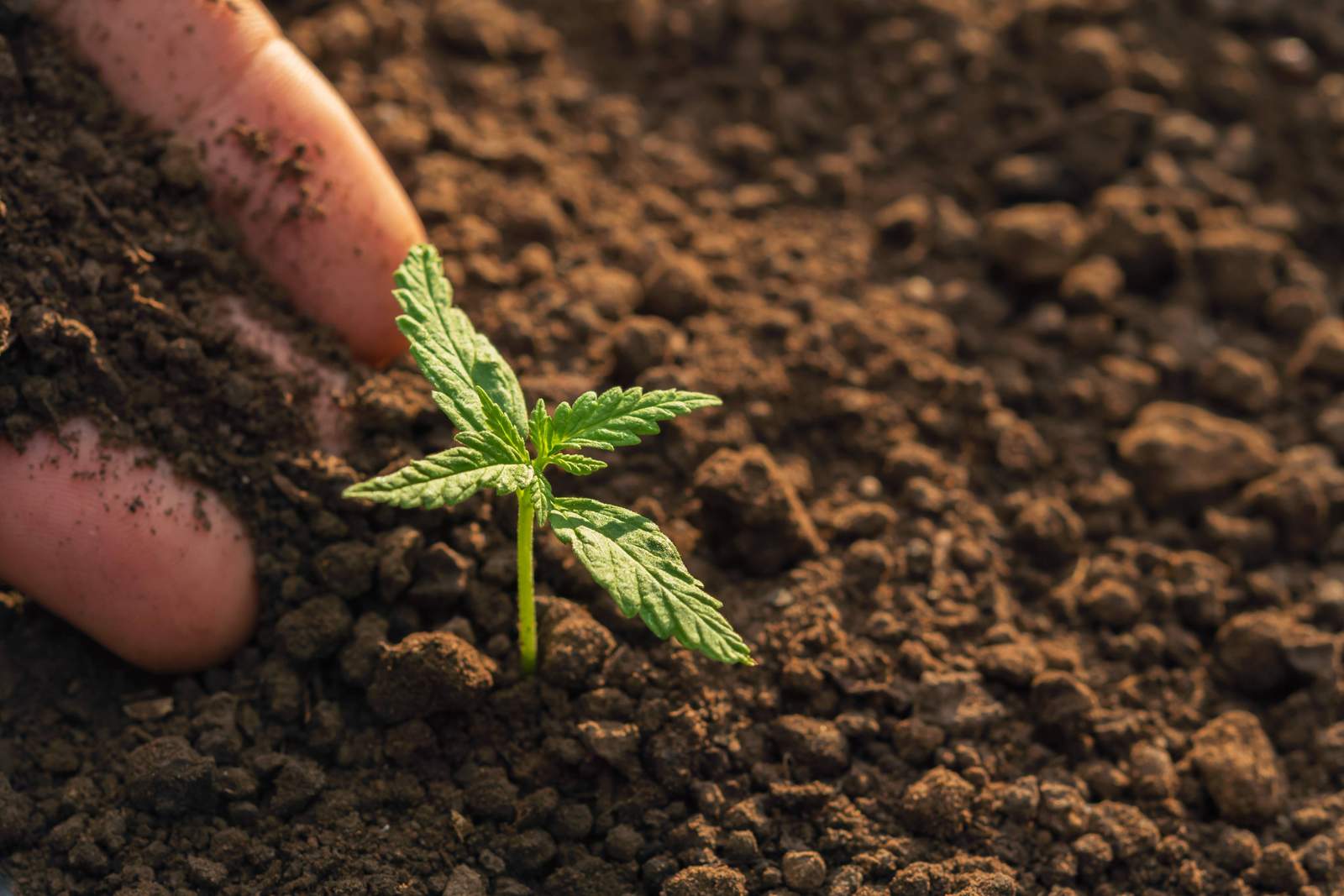 At this point, the extract is not very potent, because the extract is still in its acidic form called tetrahydrocannabinolic acid (THCA), which does not induce a high. Heat is necessary to convert THCA to THC, the psychoactive compound that causes a high.

Time and temperature play a huge role in THCA decarboxylation. Transformation begins when temperatures reach 220 degrees Fahrenheit. Decarboxylation allows THC to interact with the nervous system and the cannabinoid receptors, CB1 and CB2, thus enabling you to benefit from both the medicinal and psychoactive effects of THC.

Distillation is the final process for making cannabis oil. It is a purification process that uses heat, steam, and vacuum pressure to separate all the chemical compounds in the concentrate and produce a concentrated cannabinoid distillate. During distillation, terpenes and flavonoids are removed from the mixture for a pure cannabinoid.

The process of extracting terpenes and flavonoids requires careful monitoring according to their unique boiling points. The presence of a vacuum during distillation helps with temperature control, thus, reducing the need for high heat, which could eventually reduce your potency. The process separates the chemical compounds while also discarding unwanted materials. This leaves behind a refined and almost 100% cannabinoid, also known as cannabis distillate.

Since the cannabis distillate alone doesn’t trigger the entourage effects, you’ll need to take extra steps to preserve the various compounds (cannabinoids, terpenes, and flavonoids). You can use steam distillation and fractionation and, at the same time, remove all the solvent.

Below is the process of preserving the various compounds to produce a final cannabis distillate that is 99% pure, potent, and effective.

Cannabis distillates can also be made using the Short Path Distillation process, which is the most efficient process. This cannabis distillate process produces products that are above 90% pure.

The name of the process originates from the short distance the THC distillate travels. The entire distillation process can be done with minimal pressure, between two glass bulbs and no condenser in the middle of the two chambers.

This is best suited for unstable compounds that are volatile in high temperatures, and when the final distillate needs a smaller amount of the compound to be purified.

The distillation process starts at the molecular level, where the compounds are separated through slow thermal heating with accurate and controlled temperatures. Each of the compounds (cannabinoids, terpenes, and flavonoids) are extracted at varying boiling points. The end product is a cannabis or THC distillate with a viscous consistency.

The good thing about a cannabis distillate is that it can be mixed with other compounds such as terpenes and flavonoids to give it entourage effects as well as treating a wide range of ailments.

Cannabis distillates are highly potent; therefore, consumers should adopt the mantra of “start slow, go slow” as you build a tolerance. They are not recommended for newbies because the high levels of THC distillate might cause them to experience dizziness, low blood pressure, anxiety, or increased heart rates.

Vaping cannabis distillates might amplify the symptoms of depression, anxiety, or schizophrenia in some. Therefore, patients should monitor their reactions to determine whether to lower the dosage or choose another mode of consumption.

How to Use Cannabis Distillates

The methods below are proven for using marijuana distillates and ensure that you get the proper dose.

Sublingual administration is one of the most natural methods of ingesting distillates. Simply place a drop or two under your tongue, then leave the liquid to be absorbed and dissolved in your bloodstream. You get to experience the medicinal and psychedelic effect of the cannabis distillates faster than ingesting orally. However, the effects are not as quick as inhaling.

When a cannabis distillate is ingested in pill form, it is more powerful and will last for a longer duration than when it is smoked, vaped, or dabbed. However, it takes one or two hours to feel its effects. Pills are portable and don’t have an odor.

if you are looking for an immediate effect, you can use a dab rig or a bong to consume the cannabis distillate. Use a dabber to scoop and place the distillate on a dab nail or in the bowl of your bong. Once heated, inhale the vapor.

If you are a fan of smoking weed, then you can spread some hardened cannabis distillate on a rolling paper, and then roll your joint or blunt. You just need a few puffs to get the full effect of the distillate.

Do Cannabis Distillates Make You High?

The psychoactive effects of cannabis distillate depend on the cannabinoid you are using.  This is because the cannabis distillate process removes everything else, leaving only the desired cannabinoid. Therefore, if you are consuming CBD distillate, the chances of getting high are zero because CBD will only provide therapeutic effects. But if you are using THC distillate, you will get very high because the resulting oil is almost pure THC.

With cannabis distillates, you do not have to worry about your marijuana products having contaminants, additives, or any residual solvent because the technique used in distillation ensures that only cannabinoids, terpenes, and flavonoids get to remain at the end of the distillation process.

Cannabis distillates are decarboxylated and ready to use. Non-decarboxylated weed interacts differently with the human endocannabinoid system.

A non-decarboxylated marijuana product does not get you high because your body treats it just like any other plant. However, when you consume a decarboxylated cannabis product, you experience both the medicinal and psychoactive effects of marijuana.

Some marijuana strains can have up to 30% THC or even higher, but when they are concentrated into a distillate, total THC count can be as high as 90%, which is pretty potent. However, this depends on the amount of heat and pressure used during the distillation process.

The yield depends on the cannabinoid you want, with the most popular being CBD or THC. You should choose a marijuana strain with a high concentration of either THC or CBD.

The entourage effect is the interaction of marijuana compounds such as terpenes, flavonoids, THC, and CBD so that they’ll deliver specific physical results. For instance, THC products are ideal for treating chronic pain, and CBD is suitable for treating psychosis. However, you cannot use THC for psychosis and CBD for chronic pain because it would not work. However, when THC, terpenes, CBD, and other cannabinoids are combined, they can treat a wide range of ailments, such as depression, arthritis, and headaches, which otherwise would not be possible if they are isolated.

Unlike smoking a joint or dabbing a rig, a cannabis distillate vape is discreet, and you can use it practically anywhere. Their different modes of consumption make sure that you do not draw attention to yourself.

Do you want to know how to make cannabis distillate? This article details the process to the letter; however, we do not recommend trying this at home! While it seems easy, one mistake, and you could cause an accident or blow up your house.

How to Appreciate Cannabis Through the Various Senses

Is Trying Cannabis Right for You?

What are Trichomes, Cannabinoids, and Terpenes?