Marijuana legalization is a hot topic across the United States, and as more states legalize, it’s becoming increasingly important to know what this means. We often hear folks talking about decriminalization and legalization synonymously, but they are actually quite distinct. Here’s how they’re different.

Decriminalization can be complicated, mostly because the specifics vary by state. However, simply put, decriminalization means that an activity, such as personal marijuana use is no longer considered a crime. Instead, it is a civil infraction. If you are caught using a decriminalized substance or possess a certain amount, you can expect to receive a civil fine but not face criminal charges. However, producing and distributing the substance is still illegal.


The decriminalization of marijuana has many positive benefits.  First, it decreases the number of nonviolent offenders in jail, saving space for those who commit more serious offenses and saving the government billions of dollars. Second, it opens up access for those seeking cannabis for medical treatment. Third, it permits the use of a recreational drug that is non-toxic and much safer than alcohol or tobacco. And finally, it frees up law enforcement and prosecution for other important issues.


Related: How to Get a Marijuana Growing License


However, decriminalization by itself is not enough. What is needed is full federal marijuana legalization. This is because decriminalization alone does not allow for regulation. Ask yourself, if all of these people are allowed to use marijuana, but no one can supply it, where does marijuana come from?


The answer reveals the dangerous criminal monopoly over marijuana’s sale and manufacturing.  When it is illegal for ordinary individuals to possess the amount of marijuana that an at-home grower naturally possesses, criminal networks, gangs, and drug cartels have a facilitated monopoly on the industry- and that’s not good for anyone. Wouldn’t you rather see law-abiding adults, who obey the rules, pay taxes, and are held accountable for their actions gaining some control over what they consume? This is why marijuana should be legal.

What If you aren’t interested in growing marijuana and would prefer to purchase it from someplace safe? If progress stops at decriminalization, the only available sources for recreational cannabis are criminal operations. Not only is this risky, but it also leads to the kind of activity that further stigmatizes marijuana (such as sales to minors and health consequences of drugs produced without regulatory oversight). To eliminate this, we must go beyond decriminalization to federal marijuana legalization.

Now, you may be wondering about the specifics of legalization and how it is different from decriminalization. This, too, is complicated, as it also varies by state. In short, marijuana legalization means all criminal penalties for the production, distribution, possession, and use of marijuana are removed. This would be true all across the U.S. if this happened federally, rather than in various states scattered across the country. This change would allow for regulation, which leads to a safer industry overall and cuts down on the high levels of crime, corruption, and violence currently associated with this industry.


While these states represent some big wins for the recreational marijuana industry, it is not enough. There are huge differences between each state in how marijuana cultivation, possession, and use are treated. We must look to the legal marijuana states as evidence for the obvious benefits of federal legalization. These benefits would include a decrease in cannabis prices, better-quality cannabis, decreased policing of Black Americans, and reduced costs of marijuana policing, arrests, prosecution, and incarceration. Additionally, focusing the cannabis industry on law-abiding entrepreneurs would create additional jobs in our struggling economy, decrease marijuana use in minors, and collect tens of billions of dollars in tax revenue each year.


All of these points demonstrate why we must do more to ensure cannabis reform goes beyond decriminalization to full federal legalization of recreational marijuana for adults. 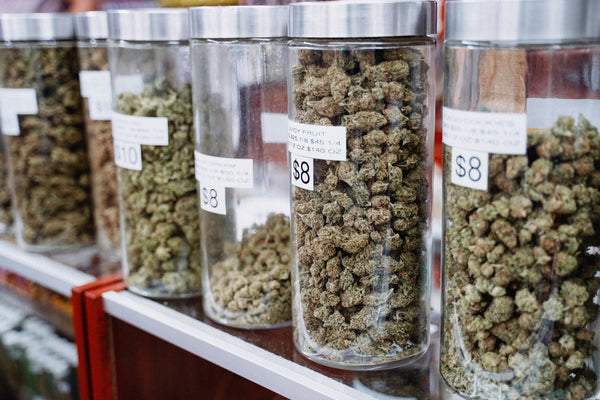 Where is Marijuana Decriminalized

Now that you know the difference between decriminalization and legalization, you may be wondering which states have decriminalized but not legalized marijuana. Here’s a list of all those states as of May 2021.


Where is it legal?

Now for the exciting stuff! Our current list of recreational marijuana legal states!

At A Pot for Pot, we believe the legal right to grow weed is something to value. If you’re legally able to grow weed, you should take advantage of this fun and fruitful hobby!


That’s why we started A Pot for Pot - to create kits that make growing weed easy and approachable for amateur home hobbyists. Our kits will supply you with everything you need, including simple directions to walk you through the process. Why wait? Check out our kits to learn more and get started growing your own weed today!

Coverage of cannabis legalization, including laws and policies, as well as election and bill updates.

Politics and The Legalization of Marijuana