The internet seems to have come to a consensus on where the word "pot" originates, but there is another layer to the etymological story of how “pot” became the 2nd most commonly used word for cannabis (after weed).

Its first print appearance came in 1938 by Chester Himes in his short story, The Way We Live Now, where it appears as, “She made him smoke pot, when he got jagged [high]...she put him on the street.”  Just reading the word “jagged” reminds us how far the english language has moved in such a short time. Given Chester Himes’s history, it would make sense for him to have once grown cannabis in a pot, or most certainly have known someone who did. 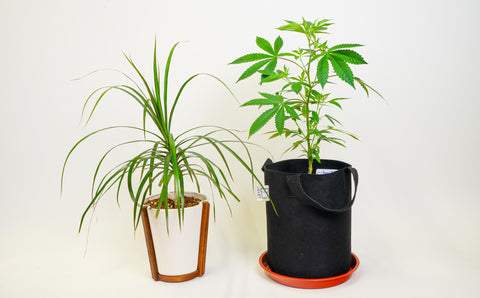 Scholars have accepted the theory that it originates from a Mexican drink called “potaguaya”. The recipe calls for wine cooked with cannabis leaves and presumably stewed in a pot. The original word’s literal translation is, “drink of grief”. If you’ve ever been cross faded with booze and blunts, you can empathize with the translation.

But this commonly accepted origin has little support except a single reference in the Oxford Dictionary.  With no traceable source for the reference, one can only assume it was cooked up by some graduate student writing a thesis with a bong beside their desk.

While your casual cannabis consumer might think of the kitchen pot because of the munchies, any grower will find their mind jump straight to the classic black garden pot, complete with a baby seedling beginning to sprout.

Given that the growers of this illegal plant are the roots of the culture and industry, it makes sense for them to be responsible for how the word grew to be synonymous with cannabis flowers. Especially since we know the slang entered use around the 1920’s or 30’s, which was the height of prohibition and the era of Reefer Madness.

Secrecy and discretion are key tools for survival when growing a plant that can send you to prison, or in extreme places, warrant a death sentence.  Because of this, growers go to great lengths to avoid getting busted. Two hard and fast rules of the growing game: you don't talk about growing, and you need to be able to hide your grow.

A key ingredient of hiding your grow is being able to move it.  Hence why you rarely see cannabis plants directly planted in the ground.  They’re almost always in a pot.

If one needs to have a conversation about their grow, perhaps in front of their landlord, a family member, or in public, using an innocuous word is quite beneficial.  Being able to quickly and discreetly communicate that the heat is coming down is another vital tool.

So it would make sense for a word like “pot” to develop a triple entendre of garden pot, kitchen pot, and an illegal plant that also happens to be grown in a pot.  Over time it would find its way into conversation, and propagate into the well understood and adored slang of today.

Perhaps the taproot of the word “pot” is potaguaya, but the feeder roots that helped it reach the Oxford Dictionary and become the second most popular word for weed have a history more complex than just a forgotten drink.

Related: The Legality of Growing Weed

Why do we call it pot?

It comes from a Mexican Spanish word Potiguaya or Potaguaya which means “marijuana leaves" OR it is because cannabis has been planted in pots due to prohibition.

Where did pot come from?

Which province made pot legal first?

In 2012, Colorado and Washington state became the first states to vote to legalize marijuana for recreational purposes.

Too Hot for Pot?

When to Plant Pot Outside In California

Clone vs Seeds: What Grows the Best Pot and Why?