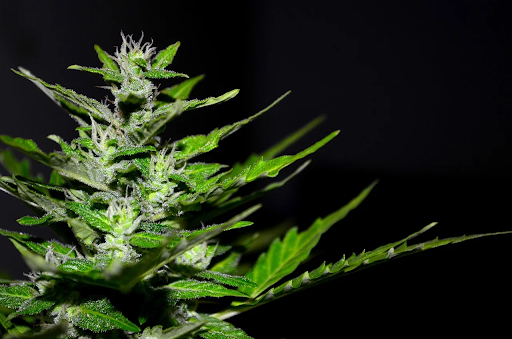 Many cannabis lovers are only familiar with two parts of the cannabis plant: the flower and the leaf. Many of them have never seen a fully matured cannabis plant up close.

When you grow marijuana, you should become familiar with cannabis plant anatomy. The function of each part of the plant and its relationship with the other parts of the plant is crucial to maintaining a healthy plant.

Male and Female Anatomy of the Cannabis Plant

The male plant has low levels of cannabinoids; however, it plays a crucial part in the fertilization and breeding process. Male plants are also a rich source of fiber.

This guide will focus on helping cannabis cultivators, as well as consumers, understand cannabis plant anatomy. Discussed below are the different parts of the marijuana plant, their functions and their relationship with the plant as a whole.

Related: How long does marijuana stay in your system

Cannabis seeds have a hard outer shell to protect the embryo. The seeds develop into seedlings when exposed to the right environmental conditions, such as temperature and moisture.

The seedling or new plant grows its first pair of small rounded leaves referred to as cotyledons and root and shoot meristems. The green color of the cotyledons signifies the presence of chlorophyll, which allows the tiny leaves to conduct photosynthesis.

After several days, serrated leaves develop. This stage of growth is referred to as the early vegetative stage. This is the stage where the plant absorbs all the energy and nutrients and directs it to the upward nodal growth of the leaves and stems.

The tail that pops from the seed to the ground lengthens and thickens with the growth of the cannabis plant and eventually becomes the plant's taproot. From the taproot, lateral roots forming a fibrous network of roots in the soil appear. These roots are responsible for absorbing water and nutrients, which are essential for the growth of the plant. The marijuana plant has small and whitish roots that like to fill out their potting mediums. The sponge-like root network is responsible for keeping up with the high-water demand of the cannabis plant and is a vital part of cannabis plant anatomy.

After the cotyledons have broken out of the seedling to the surface, they are exposed to sunlight. This is important because cotyledons use photosynthesis to produce the energy required for the plant’s growth. After a few days, the cannabis plant develops its first pair of leaves that look like a marijuana plant (for example, serrated edges and a pointed tip). As the plant grows, more pairs of leaflets emerge and grow until the plant reaches its maximum, which may be five, nine, or more. This number depends on the strain of the plant.

The energy from the sun pooled with water and carbon dioxide is used by the leaves to make plant sugars. These sugars act as the plant's source of energy as they fuel growth and the biological processes of the marijuana plant. Marijuana plant leaves have low levels of THC. This contradicts the beliefs of some weed enthusiasts, who tend to believe that the leaves are the source of THC. The function of the leaves in terms of cannabis plant anatomy is absorbing sunlight. They also protect the delicate buds from sunburn by providing shade.

These are the tiny leaves that appear on the cola. They look like they are coated in sugar, but those specks are actually trichomes. A marijuana plant’s genetics determine the density of the sugar leaves. Although they are weak sources of cannabinoids, marijuana consumers can smoke the leaves. They are also useful for edibles such as weed cookies.

Related: What Are Sugar Leaves on a Cannabis Plant?

These characteristics are observed in the early flowering of the cannabis plant in the leaf-like structures that house pollen sacs. They appear as small pear-shaped structures that develop around branches that grow away from the stem. The presence of white, whip-like hairs on the bracts signifies that the plant is female, while the presence of full and bulbous (also referred to as crab claws) ones shows that the plant is male.

When growing cannabis plants for marijuana, the male plant should be ‘sexed’ before the emergence of the pollen sacs. This eliminates the tendency of pollen grains spreading to the female flower, causing it to produce seeds instead of resin. Weed from a fertilized plant does not provide an enjoyable smoking experience.

If you’d like to produce seeds, you should pollinate the flowers in a controlled environment. This helps to prevent cross-pollination.

As a new pair of leaves grow from the previous set of leaves and push towards the sunlight, the main stem thickens and elongates. Located on either side of the stem are leaf nodes. Internode spacing is the distance between each pair of leaf nodes.

Mutations can result in irregular branching of the leaf nodes. Most growers remove the mutant cannabis plants immediately, even though they can still produce quality weed.

The central part of cannabis plant anatomy is the stem, as it provides support to the leaves, branches, and flowers. The stem houses a vascular system of tubes that supply water and other essential nutrients throughout the plant. Another part of the stem is the Xylem, which helps water and nutrients move seamlessly in the cells.

Now that you know more about your cannabis plants, use A Pot for Pot Complete Grow Kit to nurture them well.

Nodes partition the stem of a marijuana plant. They are found at the point where the plant branches off from the stem. In the early stages of marijuana plant growth, the nodes are parallel to each other, but as the plant begins flowering, the appearance of nodes along the stem length becomes irregular. 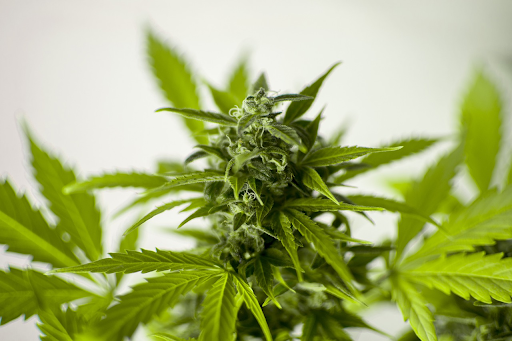 Flowers play several roles in plants, such as attracting pollinators and producing seeds once they are fertilized. As stated above, cannabis plants are dioecious in nature, and plants will have either male or female flowers.

The flowering process of the cannabis plant is vital in discerning whether the plant is a male or a female. The flowering top of a female plant is known as a cola. A plant typically has one main cola, but modern marijuana growers have come up with several methods of creating multiple main colas to help boost their yields. These methods include pinching, topping, or LST (low-stress training).

The topmost cola is known as the apical bud or main cola. It is the place where all the buds gather together to form a mass. Small clusters of colas grow between the fan leaves along the plant length. Compared to the main cola, the side colas are small, but they can be enlarged with both the LST and ScrOG (Screen of Green) methods. These two ways change the anatomy of the cannabis plant by exposing the buds to the sunlight, making them more prominent.

The flowers in male plants develop earlier than the female by a couple of weeks. They also do not have buds. It is always wise to wait for the pre-flower stage to distinguish between male and female cannabis plants. It is a male plant if a cluster of “grapes” starts to protrude, and there is no presence of white hair.

Ready to start trimming the buds? Our trimming scissors at A Pot for Pot are precise and easy to clean.

During the maturity cycle of the marijuana plant, the stigma changes colors several times, from a white hue, yellow-orange, red, and lastly, a brown hue. In terms of potency or taste, they do not have any trichome, and will not provide the desired high effect.

Pistils are the best indicator of the plant's sex as they do not appear in the male flower. When they turn yellow, it is an indication that they are ready for harvesting. If you wait for them to turn brown, the flavor and potency of the weed are lost.

These are the actual flowers of the marijuana plant. They are tear-shaped nodules found hiding between the tiny sugar leaves. Depending on the genetic strain, calyxes can appear in various colors, shapes, and sizes.

When the pistil is pollinated, the calyx is essentially turned into an ovary or seed incubator, which allows the seeds to grow. A non-pollinated calyx is rich in trichomes, which are responsible for secreting terpenes and cannabinoids, especially THC. 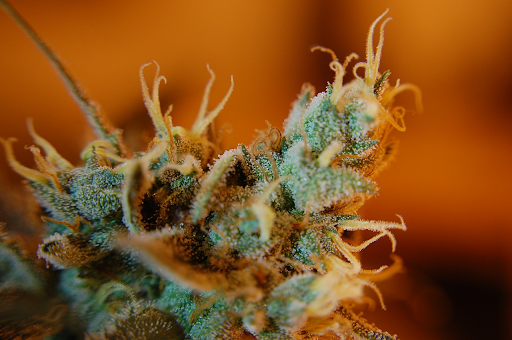 Trichomes are the most minute part of cannabis plant anatomy but are also considered the queen of marijuana. They are small, hair-like formations, which are translucent and sticky to touch due to the resin coating the flowers. There are two types of trichomes: glandular and non-glandular. Non-glandular trichomes do not have a gland. Instead, they have small hairs that develop on the leaves, stems, petioles, and sometimes on the flowers.

Glandular trichomes are classified into three trichomes which vary according to their sizes with the most enormous (capitate-stalked trichomes) being produced on the calyxes and the surrounding sugar leaves. They can easily be seen as they consist of a stalk and a large gland head. Trichomes found in these calyxes and sugary leaves contain the highest number of cannabinoids and terpenes. As these trichomes develop, they tend to change color, from clear to an amber hue with a cloudy appearance. The second-largest trichome (capitate sessile) is made up of a head and a stalk. The third and smallest trichome (bulbous) appear on the surface of the entire plant. They are 0.00059 inches (10-15 micrometers) in length.

Trichomes are used to produce aromatic oils which are used for medicinal and therapeutic purposes.

The female marijuana plant is attractive to insects, animals, and other elements. The trichomes provide the plant with defense mechanisms. The sticky nature of the trichomes protects the plants from insects and pests. The crystal-like coating protects the plants against UV light. Their strong smell serves to keep away hungry animals. Trichomes also protect marijuana plants from wind and fungi.

Apart from knowing about cannabis plant anatomy, it is also a good idea to know how and when to harvest the useful parts of the plant.

When marijuana plants exude a strong smell, they are ready for harvesting. Trichomes change color from white to amber, which signifies that they are ready to be harvested. For the best results, remove the fan leaves off the plant to expose the buds and speed up the drying process. To dry and cure your weed, hang the whole plant upside down for four days in a cool and dry place. You are then left with a beautiful bud, with its smell intact.

It’s always a good idea to avoid low-quality weed. You can recognize it by pricing, color, and bud density. Good quality weed is hard to squeeze and is crunchy and sticky to the touch. If the buds are leafy and easy to squeeze, then it is not the best quality.

Understanding cannabis plant anatomy is helpful for anyone that appreciates marijuana. Once you recognize the function of each part of the plant, you can develop a deeper appreciation for its beauty, function, and potency.

Related: How to Harvest Weed - A Step by Step Guide

The Growth of a Cannabis Plant

How to Water Cannabis Plants