One of the most valuable (and undoubtedly enjoyable) skills you should have as a cannabis lover is the knowledge and ability to make your own edibles. Buying from the dispensary is fun, but sometimes it’s not an option, or maybe you just want to do some baking while getting high at the same time.

By now, you, as an adult, should be able to make basic brownies. You can easily make them special brownies by adding your own infused cannabutter or canna-oil in place of the usual butter, vegetable, or coconut oil!


How much weed do you need for brownies?

Typically, most recipes for cannabis-infused butter (cannabutter) or oil call for up to an ounce of dried, decarboxylated cannabis flower. If you do not have that much, you can also use your leftover trimmings from your home grow.


Some recipes may call for less, like a quarter or a half-ounce of weed, and of course, you should adjust it to your own tastes and preferences. If you’re using midgrade flower or trim, it’s better to use more. If you are using high-quality, far more potent herb, you need only use a quarter of an ounce, especially if you add in your leftover trimmings from your grow.


Baking edibles is yet another reason to be aware of your tolerance and limitations. No one likes to get too high when eating edibles. Yes, there is such a thing as getting too high on edibles; just search the internet for audio of cops who ate too many edibles if you want an example or just a good laugh.

When you buy edibles like candies from the dispensary, they can last for months, though it’s hard to imagine anyone who holds onto a package of edibles for that long. Dispensary-bought edibles last longer because they are made with cannabis concentrates, such as infused cannabis oil, which does not go bad or diminish in potency as quickly.


Weed brownies, be they store-bought or homemade, have a shelf life since they usually contain eggs, butter, and other dairy products. How long would you keep brownies of the non-special type if they had been sitting out for a while? You would probably toss them out once they started to go stale and lose that delicious ooey-gooeyness that everyone loves about a good brownie. The same goes for weed brownies. After all, who wants to eat stale edible weed brownies or, worse yet, one that has spoiled?

How long do weed brownies last?

If stored at room temperature, weed brownies will last about a week, just like regular brownies. This should not be a problem for you if a pan of brownies tends to disappear as soon as you remove it from the oven or if you are planning on sharing it with friends. If, on the other hand, food becomes untouchable as soon as it qualifies as a leftover, pay particular attention to this section.


If stored in the fridge and tightly sealed, weed brownies can last up to a month.


If you want to make a large batch, your best bet is to store them in the freezer. Contrary to what some might say, storing your edibles in the freezer does not diminish their potency. Storing your brownies in a tightly sealed container like a Ziploc bag or Tupperware will extend their shelf life by up to 6 months! 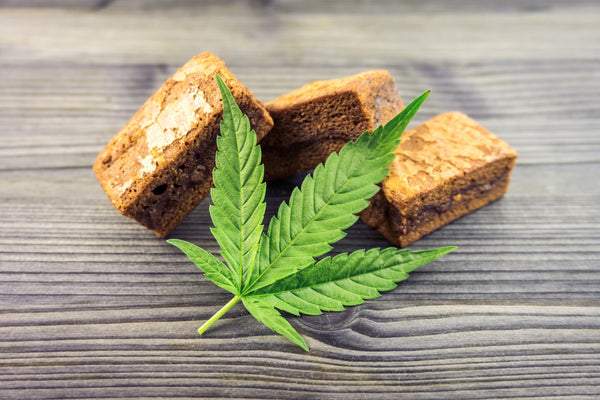 How to make weed brownies


If you are already a pro at baking brownies, simply substitute butter with cannabutter. Some recipes, such as vegan weed brownies, call for cannabis-infused coconut oil, which is lower in fat and healthier than butter. We do love some coconut oil weed brownies!

Before you attempt your weed brownie recipe, you must decarboxylate your herb. Decarboxylation happens when cannabis is exposed to heat and light. This activates THC and other cannabinoids. It’s why eating dry flower does not get you high while smoking, or in this case, making it into a delicious baked good will get you stoned off your ass.


Decarboxylating or “decarbing” your weed is a painless process. You simply spread tinfoil over a cookie sheet, evenly cover it with your weed, and bake for 25-30 minutes at 230 F (110 C). Let it cool for a bit; then you are good to go. It’s just as easy as making pizza rolls, or cinnamon rolls, or…writing this tends to make us hungry.  Now that you have decarbed your weed, you are ready to make cannabutter.

Cannabutter is also surprisingly easy to make. The two best ways to make cannabutter are 1. Use a cannabutter maker like the Magical Butter Maker, or 2. use a slow cooker such as a Crockpot or an Instapot.


One of the easiest and least labor-intensive processes for making cannabutter is with a slow cooker. All you need is two cups of butter and a quarter ounce or 7 grams of decarboxylated dried flower, as well as a slow cooker.


Set your cooker to the low setting (anything higher will affect the potency of your butter). Add your butter and stir until completely melted. Next, add your decarbed flower, mix well and cook for 3 hours. Once your butter is thoroughly cooked and chilled for a bit, strain your butter through a cheesecloth into a glass mason jar.


Now time for the brownies!

Now it’s time for the fun part, the brownies.


This recipe is a simple weed brownie recipe. If you have a preferred recipe, perhaps one passed down from your mom, use that one by all means.  Feel free to substitute the butter for coconut oil and find an egg substitute when making vegan weed brownies. This recipe takes 15 minutes to prep and 20 minutes to cook


Preheat your oven to 350 degrees and grease a 9x13 baking pan. Next, combine your cannabutter, cocoa powder, sugar, baking powder, eggs, flour, vanilla, salt. Once thoroughly mixed, spread in your greased pan. Preheat your oven and bake for 20-30 minutes or until thoroughly cooked. The best test is to use a toothpick. If it comes out dry, then your brownies are done! Let the pan cool before diving into deliciousness!


What to expect from a weed brownie high

If you have never tried weed brownies or any edible, then you are in for a treat! Edibles take some time to kick in as they must go through your digestion system, so it’ll be about 45 minutes to an hour before you feel it. You can expect a relaxing and long-lasting weed brownie high of up to 8 hours! Start with half a brownie. If you feel nothing after an hour, eat the other half. You will feel something if you don’t already!


Brownies are some of the best aspects of weed. Of course, you can use any dried flower to make weed brownies but making weed brownies from pot you’ve grown yourself is far more satisfying. Get started growing cannabis with one of our inexpensive grow kits and start making highly potent edibles.

How to Make a Sploof : A Quick and Easy Guide